Create an Account - Increase your productivity, customize your experience, and engage in information you care about.

As waves travel from deep to shallow water, they will break near the shoreline. When waves break strongly in some locations and weakly in others, this can cause circulation cells which are seen as rip currents: narrow, fast-moving belts of water traveling offshore.


Rip currents are the leading surf hazard for all beachgoers. They are particularly dangerous for weak or non-swimmers. Rip current speeds are typically 1-2 feet per second. However, speeds as high as 8 feet per second have been measured--this is faster than an Olympic swimmer can sprint! Thus, rip currents can sweep even the strongest swimmer out to sea.

Rip currents can occur at any surf beach with breaking waves, including the Great Lakes. 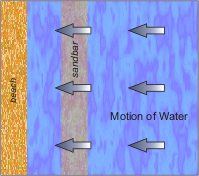 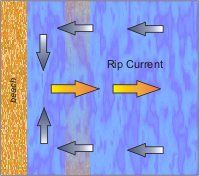 
Rip currents can be found on many surf beaches every day. Under most tide and sea conditions the speeds are relatively slow. However, under certain wave, tide, and beach profile conditions the speeds can quickly increase to become dangerous to anyone entering the surf. The strength and speed of a rip current will likely increase as wave height and wave period increase. They are most likely to be dangerous during high surf conditions as the wave height and wave period increase.

How to Identify Rip Currents


Look for any of these clues:
None, one, or more of the above clues may indicate the presence of rip currents. Rip currents are often not readily or easily identifiable to the average beachgoer. For your safety, be aware of this major surf zone hazard. Polarized sunglasses make it easier to see the rip current clues provided above.
Parks & Rec
Online Payments
Assessor
Permits
Maps & Parcels
Notify Me
Government Websites by CivicPlus®
[]